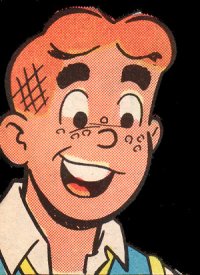 Calling all fans of Archie Comics! Number 16 has a treat for you today. You are challenged to answer a ten-question quiz on Archie and his friends. First, here’s a little background on your favourite comic book character and his creator.

Red-haired Archie Andrews and his bevy of teenage friends first appeared in Pep Comics in December of 1941. Archie was created by Vic Bloom and Bob Montana. Bob Montana attended high school in Haverhill Massachusetts from 1936 to 1939. His sketchbook of life in Haverhill was the real genesis of the Archie Comics. For example, Pop Tate’s Chocklit Shoppe (the Archie gang’s favourite hangout) was based on real-life locations frequented by teenagers in the 1930s in Montana’s hometown.

Bob Montana launched the Archie newspaper comic strip in 1946 after his return from World II military service. He drew the strip until his passing in 1975.


1.  What is the real name of Jughead Jones?

2. How old is Archie Andrews?

E. His exact age has never been given.

3. Archie Andrews wears the letter “R” on his sweater, for Riverdale High. What letter traditionally appears on Jughead’s turtlenecks?

4. Who are Polly and Chick Cooper?

5. Veronica’s father, Mr. Hiram Lodge, is a wealthy business tycoon. What is the name of his butler?

6. Archie really likes cars. What did he call his old red jalopy?

A. A diner where Archie and the gang hang out

C. A disco where Archie and his friends go to dance

D. A poor area in Riverdale

8. What subject or subjects does Miss Grundy teach?

B. History and/or Geography

E. Social Science and/ or Economics

9. What is the occupation of Reggie Mantle’s dad? (This is your bonus question. If you answer it correctly, give yourself an extra mark.)

B. Head of a newspaper printing company

C. Owner of an upscale restaurant

10. Riverdale High’s star athlete, Moose Mason, has a disability.  What is it?

A. He has poor hearing.

B. He has Attention Deficit Disorder (ADD).

C. He has a speech impediment.

D. He has dyslexia.

E. He has a mild form of autism.

Jughead’s real name is Forsythe Pendleton Jones III. In the earliest Archie comic strips, however, he was identified as Forsythe Van Jones II.

After all these years, Archie remains 17 years old.

The letter “S” traditionally appears on Jughead’s turtlenecks.  Are you wondering what the "S" stands for?  Well, according to Bob Montana's widow, Peg Bertholet, it is dervived from Jughead's old school, Squirrel Hill Intstitute of Technology.  According to Peg, there was a place in Montana's hometown of Haverhill called Skunk Hill "which Bob turned into Squirrel Hill."  Peg said that "Bob's elementary school near Haverhill called its athletic teams the Tigers..  So Jughead's "S" meant 'Squirrel Hill Independent Tigers,' and you couldn't abbreviate it any other way." 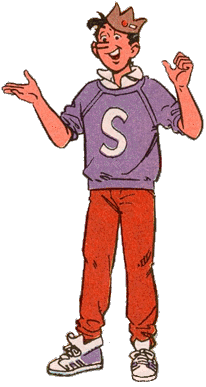 Polly and Chick Cooper are Betty Cooper’s siblings. Polly is Betty’s older sister and Chick is her older brother.

The name of the Lodge family's bald, portly butler is Hubert Smithers.

Archie called his jalopy “Ol Betsy.” It was destroyed in a 1983 issue of Life with Archie. In the newer comics, he drives a 1960s Ford Mustang.

Hot Dog is Jughead’s dog. He is a shaggy mutt and resembles a sheepdog.

Miss Grundy teaches English and/or Math. In Life with Archie, a magazine set in an alternate universe than the monthly comics (it follows the grown-up Archie and his friends), Miss Grundy died of cancer. Before her death, she married Riverdale High principal, Mr. Weatherbee. Geraldine Grundy continues to torment her students in the regular Archie series. 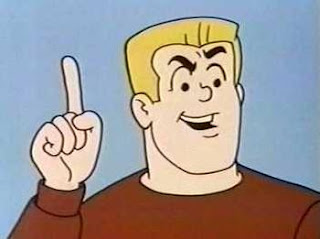 Big Moose, whose real name is Marmaduke Mason, has dyslexia. When he copied some instructions from the board incorrectly, a frustrated Miss Grundy removed him from his sports teams. An angry Moose had his eyes examined and was informed that his vision is good, but his brain receives the signals improperly.