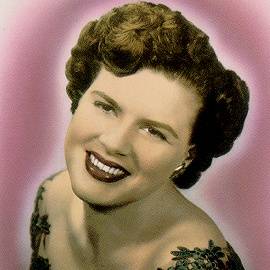 Country music star Patsy Cline died on this day 48 years ago. On March 5, 1963, she perished in a plane crash near Camden, Tennessee. She was only 30 years old and at the pinnacle of her career when she lost her life.

Patsy Cline was born Virginia Patterson Hensley on September 8, 1932 in Winchester, Virginia, the eldest of three children. Her father, Samuel Lawrence Hensley, was a blacksmith, and her mother, Hilda Patterson Hensley, was a seamstress. The young Virginia was commonly called “Ginny”. In 1947, when Ginny was 15 years old, Sam Hensley abandoned the family. After her parents divorced, the teenager was needed to help pay her family’s expenses. She dropped out of high school and began toiling at various jobs such as waitressing at a diner and working as a soda fountain attendant at a drug store. By night, however, she could be found singing at an assortment of local nightclubs, wearing Western stage outfits that she herself designed. Her seamstress mother made the costumes.

Her voice was remarkable. It was a silky, contralto voice, perfectly suited to torch songs. She first began singing in a Baptist church choir. At the age of 13, she became seriously ill with rheumatic fever and her doctor placed her in an oxygen tent. When she recovered, she discovered that the fever had affected her throat and left her with a booming voice, similar to that of Kate Smith, a singer she admired greatly.

In 1952, Ginny Hensley performed with Bill Peer and His Melody Boys at Moose Lodge in Maryland. Bill eventually became her manager. It was he who encouraged her to use the stage name “Patsy”, from “Patterson”, her middle name and her mother’s maiden name. That same year Patsy met a construction industry mogul named Gerald Cline, a man considerably older than she. They married in 1953 when Patsy was 20 years old. In September of 1954, Patsy signed a contract with Four Star Music Sales. Gerald was not supportive of her career ambitions at all.  In fact, he wanted her to give up singing and reamin at home.  The unhappy couple separated in 1956 and divorced in 1957.

In 1956, Patsy was presented with a song for her first album, Patsy Cline. It was titled "Walkin’ After Midnight", written by Don Hecht and Alan Block. Although the song did not originally make a strong impression on Cline, its writers and Four Star Music insisted that she record it.

In the summer of of 1956, Patsy Cline went to New York City to audition for a second time for Arthur Godfrey’s Talent Scouts.  It turned out to be her big break.  She was accepted to appear as a contestant on Godfrey’s CBS television program on January 21, 1957. Her rendition of "Walkin’ After Midnight" won first prize and Patsy became a regular on the show for the next two weeks. On February 11, 1957, "Walkin’ After Midnight" was released as a recording. It reached Number 2 on the Country Charts and Number 12 on the Pop Charts.

In 1956, Patsy met “the love of her life” while singing at a local dance. His name was Charles Allen Dick. Charlie Dick worked as a linotype operator at the Winchester Star newspaper.  In March of  1957, Charlie left to join the Army.  His separation from Patsy, however, was brief.  They married on September 15, 1957, a week after Patsy's 25th birthday.  The groom was 23.  After the wedding, the newlyweds moved to Fayetteville, North Carolina because Charlie was stationed at Fort Bragg.

In 1959, Patsy and her family moved to Nashville. That same year, Patsy met Randy Hughes who became her manager. In 1960, Patsy’s recording contract with Four Stars came to an end and she signed with Decca-Records - Nashville. Clline’s first release on her new Decca label was “I Fall to Pieces”. “I Fall to Pieces” was a great success. It was a crossover hit and was promoted on both country and pop music stations. Patsy’s career began to thrive under the direction of manager Randy Hughes and legendary Decca producer, Owen Bradley. Her dream of joining the cast of the Grand Ole Opry came true and she became one of its biggest stars.

The year 1961 started off well for Patsy Cline. In January, she and Charlie welcomed their second child, a son, Allen Randolph “Randy” Dick. On June 14, 1961, however, disaster struck! Patsy and her brother, Sam, were involved in a near-fatal car accident on Old Hickory Boulevard in Nashville. The head-on collision took place in front of a high school and Patsy almost lost her life from the impact of hitting the windshield. Her injuries included a jagged cut across her forehead, a broken wrist and a dislocated hip. She was required to spend a month in the hospital in order to recuperate. Patsy miraculously survived the crisis, although she did incur a visible scar on her forehead. After the accident, she wore wigs and used makeup to conceal the scar during her performances.

After the success of “I Fall to Pieces”, Patsy Cline was in need of a worthy follow-up. She found it in “Crazy”, a song composed by Willie Nelson in 1961. "Crazy" was an immediate country pop crossover hit, and her most successful pop hit.  It became a classic and Patsy’s signature song.  With the popularity of “Crazy” and the rise of “She’s Got You” and “Imagine That” on the charts, 1962 turned out to be a banner year for Patsy Cline.  In February, she made an appearance on American Bandstand and then headlined a 35-day show in Las Vegas in November.

On March 3, 1963, Patsy travelled to Kansas City to perform three shows as part of a benefit concert for the family disc jockey Cactus Jack Call who had recently lost his life in a car accident. Cline gamely took the stage in Kansas City although she was suffering from the flu. Singer Dottie West offered to drive Patsy  back to Nashville, but Patsy declined because she was anxious to get home to her family and had decided to fly home instead in her manager’s yellow Piper Comanche. The plane flew into severe weather and crashed near Camden, Tennessee on March 5, 1963. Cline and three others died in the crash. Grand Ole Opry stars Cowboy Copas and Hawkshaw Hawkins were also victims of the accident. Patsy Cline’s manager, Randy Hughes, was the pilot of the ill-fated aircraft.

After Patsy's death, Charlie Dick considered returning to Virginia.  Loretta Lynn and Dottie West and their husbands persuaded him to remain in Nashville.  On July 4, 1965, he married country singer Jamey Ryan.  They had a son, Charles Allen Dick, Jr., known as "Chip", and divorced in 1972.

Were she alive today, Patsy Cline would be spending time with her 4 grandchildren and 3 great-grandchildren (as of July 2006).

To watch a video of an interview with Charlie Dick, click on the link below.

To watch a video of Patsy Cline singing "Crazy", click on the link below.