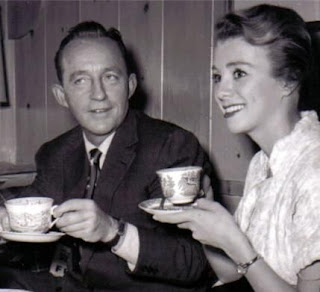 In September of 1930, Bing Crosby married Dixie Lee, a nightclub singer and actress from Harriman, Tennessee. Dixie suffered from acute alcoholism and she died of ovarian cancer on November 1, 1952, three days before her 41st birthday. After Dixie’s death, the enormously popular entertainer found himself a widower with four sons: Gary (born October 1933), twins Dennis and Phillip (born 1934), and Lindsay (born 1938). Bing was overwhelmed by Dixie’s death and the challenge of raising their four boys.

Of the children of Bing Crosby’s first marriage, only Phillip survives. Dennis and Lindsay both reportedly committed suicide and Gary died of lung cancer in 1995 at the age of 62. After Bing’s death, Gary published a memoir titled Going My Own Way. In his book, Gary, who was also a singer and actor, accuses his father of both physical and psychological abuse.

In late 1956, Crosby began filming Man on Fire with a beautiful blonde newcomer named Inger Stevens. Stevens was 22 years old when she was cast opposite Bing. Man on Fire was her big break, her motion picture debut. The drama, about the effects of divorce on a family, was not enthusiastically received. 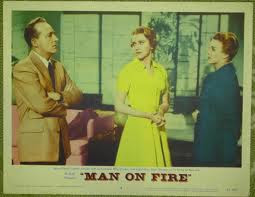 Man on Fire marked the first time Bing Crosby starred in a film without any singing, although he did croon the title song over the opening credits. Crosby portrayed wealthy businessman Earl Carleton, a troubled father devastated by his bitter divorce and the ensuing custody battle for his son. Stevens, who played the role of Crosby’s sympathetic attorney, earned favourable reviews for her performance.

To watch the original trailer for Man on Fire (with Ed Sullivan and Bing), click on the link below.

Inger Stevens was born Inger Stensland in Stockholm, Sweden on October 18, 1934, the eldest of three children. She had a difficult childhood. When she was only 6, her mother abandoned the family for another man. Her parents divorced when Inger was 9 years after which Inger’s father immigrated to the United States and remarried. In 1944, he summoned Inger and her younger brother, Ola, to join him and his new wife in New York City.

When Inger was 13, the family moved to Manhattan, Kansas. In July of 1951, an unhappy Inger ran away to Kansas City and at the age of 16, she appeared in a Kansas City burlesque show. Her father brought her back home and she graduated from Manhattan High School in May of 1952.

Inger studied dance at Kansas State University, then moved to Kansas City where she worked as a dance instructor and got a start in modelling. In October of 1953, she relocated to New York and found employment as a model while studying acting at the Actor’s Studio. Her career began to blossom as she appeared in television series, commercials and in plays.

In July of 1955, Stephens married her agent, Anthony Sogio. Their marriage was short-lived and the couple separated in early 1956. Ingrid then moved to California and obtained American citizenship. In 1957, while filming Man on Fire, Inger Stephens filed for divorce from Sogio (it became official in 1958).

Man on Fire was released in 1957. Although it did not create a sensation, it led to a romance between the baritone crooner and the young Swedish-born actress. Throughout her career, Stevens displayed a propensity for falling in love with her co-stars and Bing Crosby, 31 years her senior, was no exception. The affair began after Inger suffered an appendicitis attack on the set in December of 1956. The two grew close during Crosby’s visits with her at the hospital.

Inger had hopes of marrying Crosby although she refused to convert to Catholicism for him. Soon after the release of Man on Fire, Bing invited her to supervise the renovation of his Palm Springs home. Stevens was under the mistaken impression that this was to be their matrimonial home. Unbeknownst to her, Bing was also seriously involved with another young actress named Kathryn Grant. It was while working on the house that Inger learned about Bing’s marriage to Kathryn.

Bing first met the Texas-born Grant on the Paramount set in 1954 when he was filming White Christmas. The two had an on-again, off-again relationship, but finally wed on October 24, 1957 in Las Vegas, Nevada at St. Anne’s Church (Grant converted to Catholicism). The newlyweds settled in Hillsborough, California and raised three children: Harry (born 1958), Mary (of Dallas fame, born 1959) and Nathaniel (born 1961).

Bing died on October 14, 1977 at the age of 74 while playing golf in Madrid, Spain. Kathryn was left a 44-year-old widow and she became the author of several books about her life with Bing. After Crosby’s death, she took on some minor stage roles and the lead in the 1996 short-lived Broadway musical State Fair. In 2000, Kathryn married for the second time to Maurice William Sullivan. On November 24, 2010, she was seriously injured in a car accident in the Sierra Nevada. Her 85-year-old husband lost his life in the accident.

Inger Stevens returned to New York City after her ill-fated love affair with Crosby.  Distraught over her failed romance, she attempted suicide in her Gramercy Place apartment in January of 1959. The following year, she returned to California and resumed her career. Although she had roles in major films, she achieved her greatest success on television. In 1960, She starred in two memorable episodes of The Twilight Zone and also appeared in episodes of Route 66 (1961 and 1962), The Detectives (1961) and The Eleventh Hour (1962). In 1963, she became a household name when she won the leading role in The Farmer’s Daughter.

In The Farmer’s Daughter, Inger Stevens portrayed Katy Holstrum, a Swedish farm girl who left her home in Minnesota to become a housekeeper for a congressman in Washington. Inger’s character was quite opinionated and somewhat of a feminist for her era. The show was a smash hit for her and co-star William Windom who played Congressman Glen Morley. It ran on ABC until 1966.

After the cancellation of The Farmer’s Daughter, Inger returned to the silver screen. In 1967, she starred opposite Walter Matthau in A Guide for the Married Man. In 1968, she appeared in films with such luminaries as Henry Fonda, Richard Widmark and Dean Martin. By 1970, she was ready to attempt a comeback on television with the detective drama series The Most Deadly Game. Alas, it was not to be. On the morning of April 30, 1970, Stephens was found lying face down on the kitchen floor of her Hollywood home. She died en route to hospital of "acute barbiturate intoxication," a deadly combination of drugs and alcohol, according to Los Angeles Coroner Thomas Noguchi.  She was 35 years old.

After Inger’s death, Ike Jones, an African-American actor and producer, claimed to have married the actress in Mexico in 1961.  During the settling of her estate, Inger's brother,Carl O. Stensland, backed Jones' claim.  Since interracial unions were frowned upon in Hollywood in the 1960s, Stensland stated that the marriage was kept secret so that Inger's career would not be jeopardized. Although estranged, Inger and Ike remained married at the time of Stevens’ death.  Jones, who was born on December 23, 1929, is now 81 years old.

EDITOR'S UPDATE (January 2, 2013): Ike Jones passed away on October 5, 2014 in Los Angeles, California.  He was 84 years old at the time of his death at an assisted-living facility.