I realize also that I share this honour with many friends and colleagues who have worked with me for the promotion of peace and good understanding between peoples. I am grateful for the opportunities I have been given to participate in that work as a representative of my country, Canada, whose people have, I think, shown their devotion to peace.

(From Lester Bowles Pearson's Acceptance Speech, on the occasion of the award of the Nobel Peace Prize in Oslo, Norway, December 10, 1957)
ON THIS DAY

On October 12, 1957, Lester B. Pearson (Prime Minister of Canada from 1963 to 1968) brought honour and pride to this country. 53 years ago today, Pearson was informed that he had won the Nobel Peace Prize and remains the only Canadian to have done so.  Pearson earned the prize for creating the United Nations Emergency Force (UNEF) to help bring peace in Egypt following the Suez Crisis.

The Suez conflict arose In July of 1956 when Egyptian President Gamal Abdel Nasser took control of the Suez Canal which connects the Mediterranean and Red seas. This was a setback for Western pride and commerce. As a result, Britain, France and Israel secretly agreed to take action against Egypt. Israel attacked in late October and Britain and France ordered Israel and Egypt to retreat from the immediate area of the canal. When Nasser refused, Britain and France bombed the Canal Zone. To solve the crisis, Lester Pearson proposed the world’s first ever peacekeeping force at the UN General Assembly. Using his network of connections and his years of diplomatic experience, he succeeded in persuading the world assembly to create this UN peacekeeping force.

During his tenure as prime minister, Lester Pearson never presided over a majority government. He led two successive minority governments. Yet, Parliament worked and much was achieved. During the Pearson years, his minority governments introduced universal health care, student loans, the Canada Pension Plan, the Order of Canada and the current Canadian Maple Leaf flag. Person also convened over the Royal Commission on Bilingualism and Biculturalism. That’s not too shabby a list of accomplishments for two minority governments, is it? (Take note, Stephen Harper) Minority government can work quite effectively, albeit with the right prime minister.

To listen to Lester Pearson speak about his Nobel Peace Prize, click the link below.

What kind of audience will you find in a prison?


FORKS OF THE CREDIT

I spent yesterday afternoon enjoying the fall colours at the Forks of the Credit Provincial Park, near Caledon, Ontario.  If you have an opportunity to go there, especially in the autumn, I highly recommend it.  Here is a photo I took there. 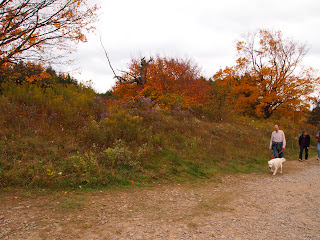